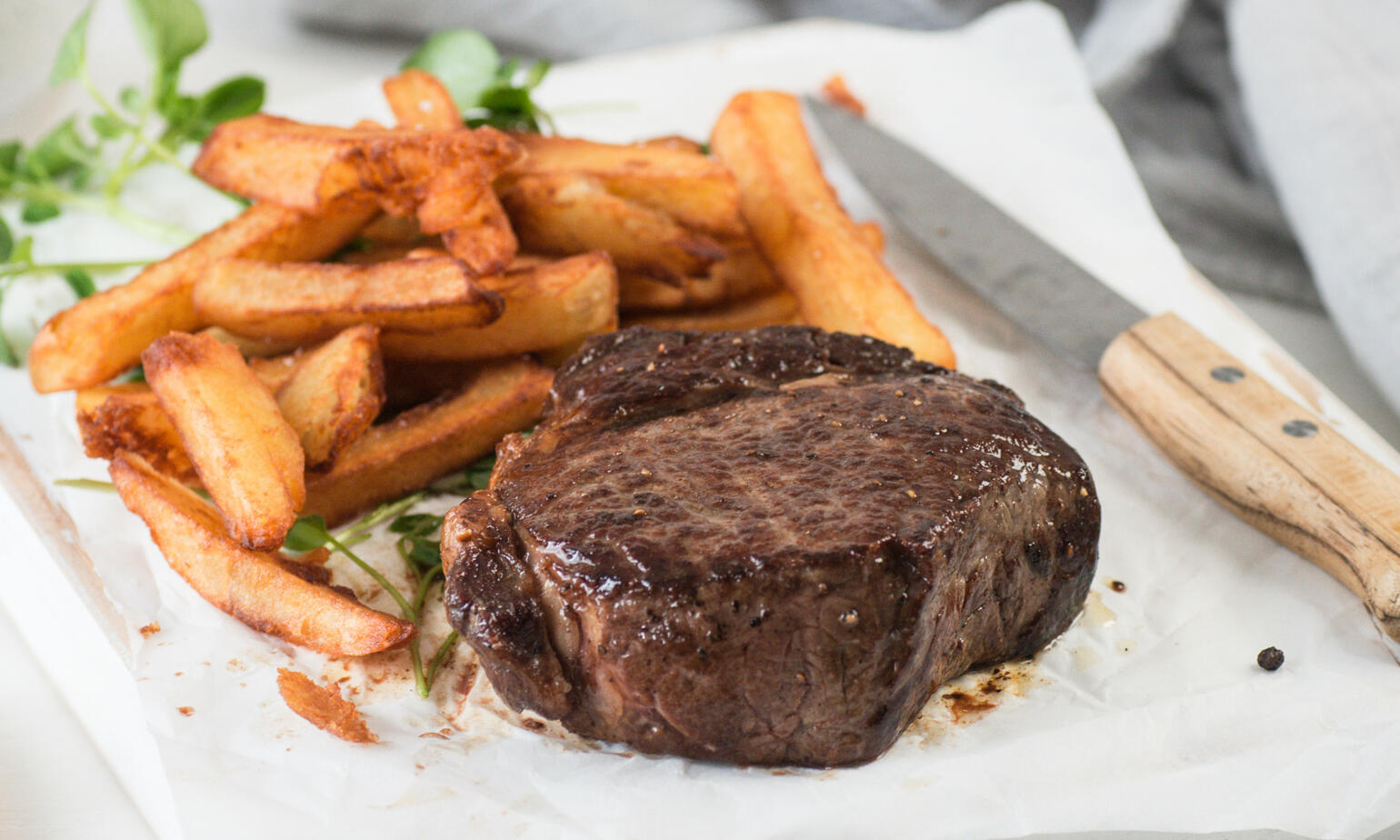 History of the steak

Choosing the right steak for you

Pan sear versus Grilling over coals

What's the best seasoning or Rub I should use?

When is my steak cooked?

Is resting your steak important & why?

What does carve against the grain really mean?

HISTORY OF THE STEAK

The word steak originates from the mid-15th century Scandinavian word steik , or 'stickna' in the Middle English dialect, along with the old Norse word steikja. The Oxford English dictionary first reference is to "a thick slice of meat cut for roasting or grilling or frying, sometimes used in a pie or pudding; especially a piece cut from the hindquarters of the animal."

A steakhouse or chophouse is a restaurant that specializes in steaks and chops.

Chophouses started in London in the 1690s and served individual portions of meat, known as chops. The traditional nature of the food served was zealously maintained through the late 19th century despite the new cooking styles from the continent, which were beginning to become fashionable. The houses were normally only open for men.

The steakhouse started in the United States in the late 19th century as a development from traditional inns and bars.

CHOOSING THE RIGHT STEAK FOR YOU

Choosing the right steak is a very personal decision, there's so much variance from one cut to another, then flavour profile between innumerable breeds, the way the cattle was reared & how the cook executes the final piece of the jigsaw.

Fillet is by far the softest texture of all the cuts, chateaubriand & medallions also come from the fillet, the meat is the most tender, lean and mellow flavoured of all the steaks, therefore the most luxurious and expensive. Centre cut fillet steak is the choice of the pro chef for the both appearance, consistency and taste.

Sirloin is a real classic, packed with flavour and tenderness,interlaced with good marbling and a covering of fat on top. This fat is what makes sirloin taste so good, rendering the fat as it cooks heightens the flavour profile to another level, a extremely popular steak across the globe

Rib eye is juicy and richly flavoured with a rustic appearance, generous marbling and consists of 2 muscles connected together, creating wonderful texture. The nugget of melting fat at the core of the steak often referred to as the 'eye' melts during cooking to make it taste extra succulent, buttery and mellow. The latest steak to join the popular club emerging from steakhouses in the USA in the 80's.

Rump is lean with a robust, firm texture and rich traditional beefy flavour. Rump steaks can be prepared in a variety of cuts such as the famed Picanha, Rump heart (Pavé) & traditional bistro cut.

Beyond these 4 popular steaks there's literally hundreds of choices, popular steaks right now are some less well & less expensive options known such as The Flat Iron, taken from the forequarter, a mellow, buttery steak cooked medium rare is a real sensation.

Then there's The Hanger Steak, famous in France which is called the onglet, a extremely rich, juicy steak with a little chew, for me the flavour easily outweighs the extra bite it carries, almost gamey taste with notes of caramelized liver.

Then there are the big steaks, left on the bone such as The Cote du boeuf, The Tomahawk & The Porterhouse, perfect for sharing. By cooking on the bone they carry additional flavour & juiciness, these are really special cuts for a special feast

PAN SEAR VERSUS GRILLING OVER COALS

There are definite benefits from both styles of cooking.

Pan sear in a heavy based frying pan over high heat creates a really complex maillard reaction on the surface of the steak which in turn gives us real depth of caramel flavours, follow this by adding butter to the pan & basting continuously over the steak for the final few minutes of cooking will give you a restaurant quality finish, rich, nutty unctuous yet refined flavour profile.

Grilling over direct heat such as a BBQ is another amazing way to cook steak, the rustic, smoky aromas & the intense charring creates a real taste of how steak was meant to be eaten, to master cooking over burning coals this can take a while but the rewards are really worth all the effort, however when your cooking steak my view is the less fuss the better, quality sea salt & freshly cracked black pepper then finished with a generous amount of rich unsalted butter is the ultimate treatment.

Grilling - using a heat source directly below or above the food

Griddle - a heavy, flat iron plate that is heated and used for cooking food on

Broiling - to cook by direct heat, as on a gridiron over the heat or in an oven under the heat

Choose a oil or fat that can reach high temperatures without burning, my preferred choice is goose or duck fat, just a little smudged onto the steak will give extra depth of flavour once cooked, otherwise choose a oil such as groundnut which is quite mellow & withstands extreme heat. Don't use butter in the beginning as this will burn leaving a acrid taste, i finish my steak by adding butter towards the end of cooking then basting the steak for a minute or two.

Certain steaks with high fat content can go directly onto the heat source, rendering the fat, which adds great natural flavour back into the steak.

WHAT'S THE BEST SEASONING OR RUB I SHOULD USE?

My personal preference is to use quality sea salt & freshly cracked black pepper, with great meat we really don't need to mask the flavour, served alongside a great béarnaise sauce or chimichurri is all you need.

Basting is a cooking technique that involves cooking meat with either its own rendered fat & juices or a sauce or marinade. In the instance of steak adding butter to the hot pan then when it starts to bubble & foam drench the steak with the butter constantly the final couple of minutes cooking, for larger joints periodically spoon any fat & juices over the meat.

WHEN IS MY STEAK COOKED ?

Blue: Should still be a dark colour, almost purple, and just warm. It will feel spongy with no resistance.

Rare: Dark red in colour with some juice flowing. It will feel soft and spongy with slight resistance.

Medium-rare: A more pink colour with a little pink juice flowing. It will be a bit soft and spongy and slightly springy.

Medium: Pale pink in the middle with hardly any juice flowing. It will feel firm and springy.

Well-done: Only a trace of pink colour but not dry. It will feel spongy and soft and slightly springy.

IS RESTING YOUR STEAK IMPORTANT AND WHY?

The time taken to rest before carving a steak should be for a minimum of 5 minutes before serving or up to half the time of cooking, leave to rest on a wire rack in a warm place so as the meat doesn't go cold.

WHAT DOES 'CARVE AGAINST THE GRAIN' REALLY MEAN?

To maximize tenderness & ensure your steak is not too chewy it's imperative you slice against the grain.

Meat is a muscle and it's designed to be tough, without muscles the cattle would not be able to move.

A cow's muscle structure contains long strings of muscle cells known as fibers. One fiber as fine as a human hair.. The challenge when eating is the fact that the fibers are bundled together, clusters as such of 50 or more.

These bundles create the "grain" of meat. You'll see the grain most pronounced in the toughest muscle groups, from the forequarter such as brisket, shoulder, shin & rump. Tender cuts, such as sirloin, fillet or rib eye, have fewer muscle fibers because they don't work as hard.

Remember if you don't cut the fibers crosswise 'against the grain'-regardless of the cut-you'll be chewing on longer, intact muscle fibers

Bone in steaks such as the Porterhouse & Tomahawk muscles are anchored to bones, and fibers tend to run parallel to the bone. So cutting crosswise to the bone is slicing against the grain.

First and foremost, relax. Do not clench the knife but use a light grip. Use a long slicing motion and let the knife do the work.

Glide your way through each slice in one or two motions to avoid shredding the meat. Starting at the narrower tip, slice 2 cm (½-inch) slices. always slice from the smallest end of a steak as it's easier to test than cutting through the wider end.

Cut perpendicular to the grain so you'll slice through the long fibers, and thinly slice the meat on a bias.