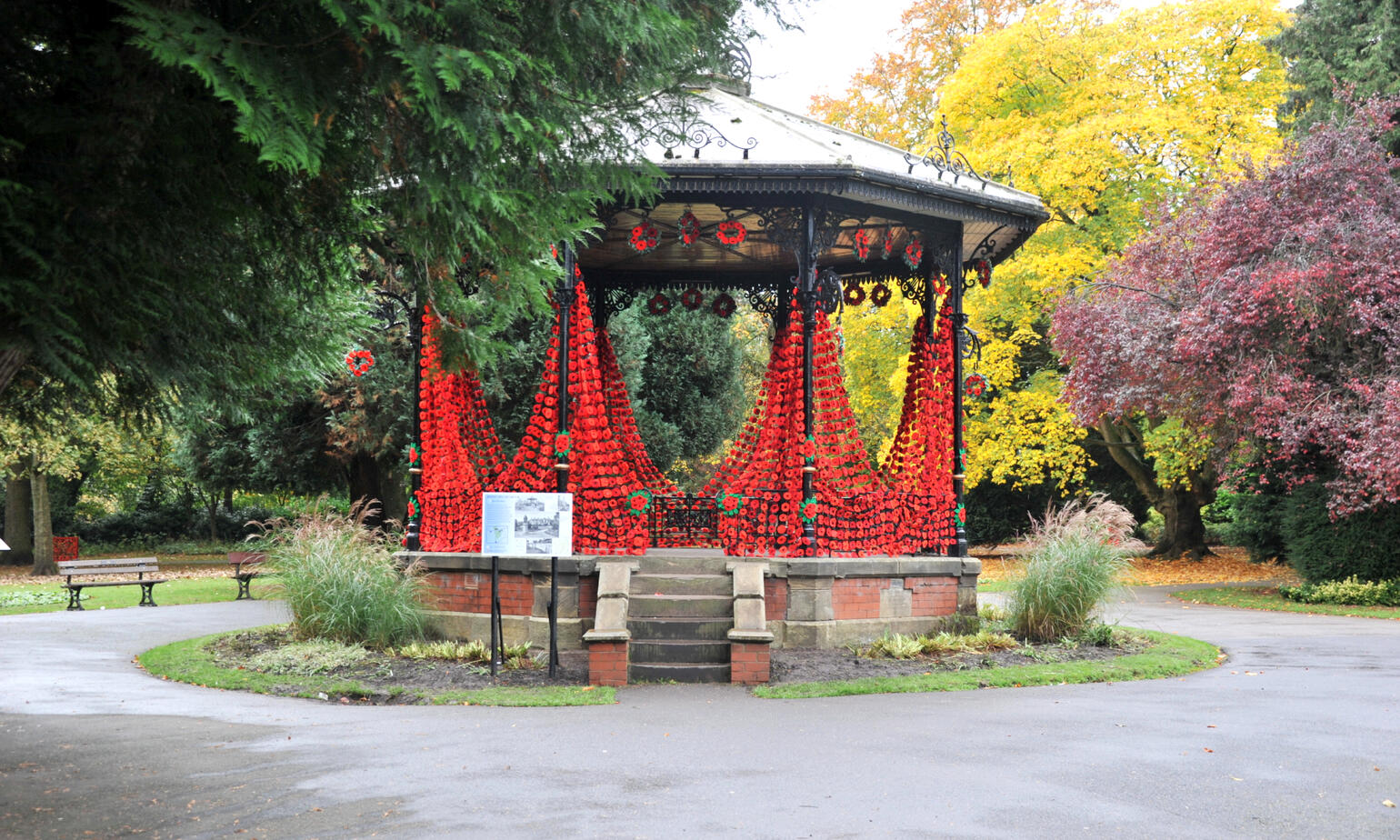 Greetings from the Dales and Fells. Shortly after my last update we had sad news at F&Co as Stephen Johnson, our hygiene supervisor, passed away suddenly. Stephen was a valued and well-liked member of the team; always with a sparkle in his eye and a kind word for everyone. As hygiene supervisor Stephen ran a tight ship at Farmison & Co, ensuring not only that we are clean and tidy, but he greatly contributed to the high standards that have seen our head office comfortably attain industry accreditation for handling food - and receive glowing feedback in the process. Stephen will be sorely missed professionally and personally, and our thoughts here are with Susan and his family and friends.

This past week in Ripon, our little city has been preparing for the annual commemoration of Armistice Day. At this time of year poppies appear everywhere, such as on the Victorian bandstand in the Spa Gardens pictured below. We have been keenly following the developments leading up to the UN Climate Conference next week. Make no mistake, the conference in Glasgow will be something historians point to in the years to come.

It's being billed as make or break moment but I am wary of narratives dealing in absolutes' although I am used to them when people discuss climate change and farming in the same breath. That's why if I was hosting the UN Climate Conference next week, I would put delegates in our Farmison & Co minibus and drive them up the Dales for a lesson about regenerative agriculture. I would make sure that Argentina, Australia, Brazil, and the United States came along. I'd give a front row seat to the British Government.

Why these new world countries? It happens a lot that someone will say to me, "don't you know meat is bad for the climate?" And, most of the time, these offenders crop up in conversation. I call it the 'cowspiracy-effect,' after the Netflix documentary about destructive American beef farming. And why our Government? Well does our government understand the value of our native livestock? I'm not so sure they do. While cattle are central to the culture and economy of the new world, the origin of much of the world's herds are British. The Dales are an excellent place to spy our heritage breeds grazing on pasture, though it needn't be Yorkshire; it could be pastures scattered across these isles.

These heritage breeds have been 'improved' by selective breeding for centuries in these isles to turn grass into meat. The meat wasn't consumed often; the land could only support so many animals of course. Yet when the settlers crossed the oceans to find millions of acres of pristine grasslands, they set their herds and flocks loose. The American diet has never recovered.

Today, the process of raising beef in these countries is about as far removed from the humble Dales farm as you can imagine. The scale is unimaginable and it's increasingly automated - a chilling way of raising livestock. This style of farming has nothing to do with the seasons or doing things in balance with the environment. Feedlot cows, aliens in their foreign ecology, are fattened on soya and the Amazon is burning to grow this.

When the delegates meet next week, they need to remember that a black and white picture that globally paints all meat as bad is plain wrong. Livestock farming can be beneficial especially when done in a regenerative fashion. That means small scale, putting carbon back into the soil and letting grasslands recover. These systems aren't just better for the planet, they're better for the animal too. It's no coincidence either that the environment close to regenerative livestock pastures are often teeming with wildlife. In much of the arable land in this country, there is no space allowed for competition in what are essentially monocultures.

When I'm told plant-based diets are the only solution, I am increasingly appalled. The best-selling vegan recipe books in this country are awash with ingredients that are imported from the tropics. There's nothing seasonal about these diets, or in many cases of hyper-processed foods, nutritious.

The fact is British meat is some of the most sustainable in the world. Our Yorkshire grasslands don't exactly want for water while the pastures are abundant in wildlife. Of course, not all farms in this country are shining lights of sustainability, but it's my new world guests on my Dales road trip that urgently need to get their houses in order to both reduce and transform their livestock production.

I fear that sustainable British farms are going to carry the can for global black and white thinking about meat. All the while, squeezed farmers who do things properly, may have to contend with further floods of cheap meat. With the striking of a free trade deal with New Zealand by our own government, we face the prospect of our breeds being sold back to us cheaply. While we ought to be eating better meat, produced close to home in a regenerative fashion, we are effectively off-shoring a sizeable quantity of our meat production.

I am often challenged that feeding the nation with British produce cannot be done; that there simply isn't enough land or that 'better' meat is too expensive. Right now, we are a steak eating country, but we should - as a nation - be cooking and eating the entire carcass and appreciating these cuts that have dropped off the menu for so many. This is far more sustainable and affordable than importing cheap meat.

Undoubtedly the intentions behind the Climate Conference are good, but good intentions can lead to hot places.