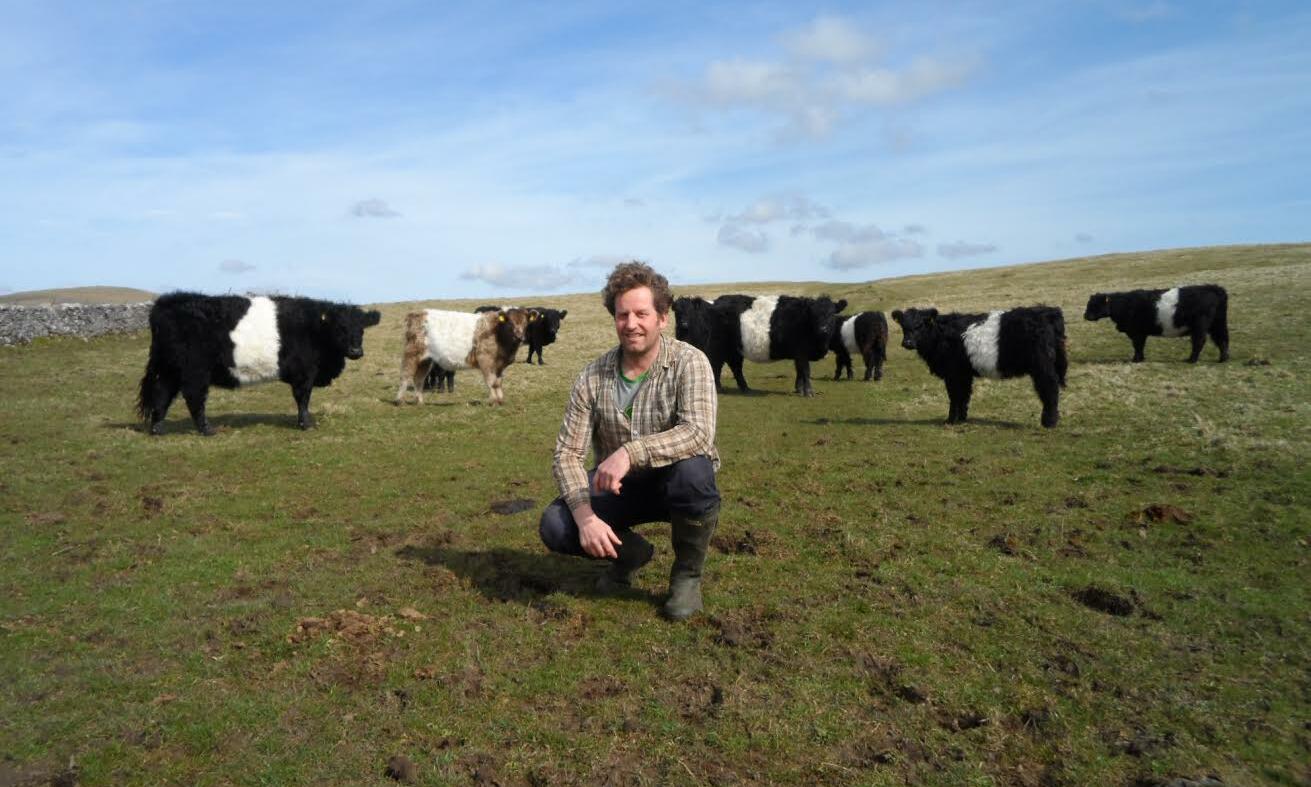 'We've had such fantastic feedback about the taste and texture of the beef produced by these wonderful animals,' say Neil. 'TV chefs are regularly recommending both Belted Galloway and Galloway beef, but this isn't some passing phase of popularity. We've also received an extremely positive response locally. It is tremendously reassuring to see customers, of whom many are from non-countryside backgrounds, realise the benefits the breed is also bringing to the landscape and biodiversity in the hills and we're delighted to bring this taste experience to Farmison & Co.'

Hill Top Farm had been a predominantly sheep farming operation until Neil took on the 'Belties' in 2003. Today his Belted Galloway cattle form a major part of the farm business, contribute massively to the beauty and sustainability of the hilly landscape around Malham and with their distinctive black-and-white colouring also add another dimension for visitors. Neil has seen the benefits his Belted Galloways have brought to the Dales.

'There was a relatively small conservation grazing project called Limestone Country Project in the Yorkshire Dales and areas of limestone pastures had been selected where it was felt that reintroducing cattle would benefit them and create the biodiversity that would help plant life and wildlife.'

'Grazing the 'Belties' on the pastures was shown to have a very positive impact within a relatively short space of time and so the acreage to be covered was increased further and that saw us add to our numbers. We currently have around 120 head of Belted Galloway cattle and have become approved suppliers of the Pasture Fed Livestock Association that guarantees natural, grass fed beef and lamb. I'd urge any beef lovers to keep an eye out for membership of this organisation. It really does let you know that what you're enjoying is also benefiting the environment.'

Tasty, succulent native beef is at its best, rather like malt whisky, the older it gets. Maturity brings superior flavour through marbling and the Belted Galloway and Galloway breeds are renowned for the beef produced at around 4 years old.

'That's one of the reasons why Farmison & Co approached me,' says Neil. 'They understand that mature, grass fed, native beef provides consumers with a meat product that is as healthy as it is possible to be, having come from a totally natural environment with nothing added. There is a growing appetite for the beef and lamb from traditional, native breed animals reared and managed this way.'

Belted Galloways were on the Rare Breeds Endangered List just over twenty years ago but the combination of their flavoursome, tasty beef and their contribution to the countryside in living off what in farming terms are less favoured areas has seen a constant rise in herd numbers.

Hardiness, being able to live outside throughout winter and largely without any addition to their own diet other than natural moorland grasses and weeds means that 'Belties' are low cost cattle too.

'Our cattle are entirely grass fed,' says Neil. 'They receive nothing out of a packet, bottle or bucket. In really bad weather conditions we will bring them silage or hay, so everything they get is natural. That's what makes all the difference and it's what beef connoisseurs have come to realise. That's also why the Belted Galloway and the Galloway have been able to rise up in numbers.'

Farming in the hills can be tough, but Neil's experience with his 'Belties' has brought about a new direction to his other enterprise, the sheep. The lessons learned have led to a reduction in flock size and a more considered approach to marketing.

'When we started with the 'Belties' it was mainly to meet conservation grazing targets and to fit with stewardship payments for looking after the land, but having increased the herd and being low cost they are now sustaining the farm in their own right. We're now applying similar cost saving lessons with our Swaledale flock and working towards what we have been doing on the cattle side. We're keeping them longer, grazing them on grass with little in the way of anything extra and we're finding that the lamb is benefitting in the same way as the cattle on taste and succulence.'

'Our 'Belties' have become the farming operation that has given as a much more sustainable future and we are certain that customers of Farmison & Co will be impressed by our beef.'

Neil and partner Leigh Weston have a young daughter, Violet. Neil's parents Annie and John converted some old buildings 30 years ago into a bunk barn that sleeps 32 and also have a holiday cottage. Neil is a member of Yorkshire Dales National Park Authority; is a past player and now committee member of Wharfedale RUFC; and plays cricket for Littondale in the Dales Evening League.

Click here to view our Belted Galloway range in full