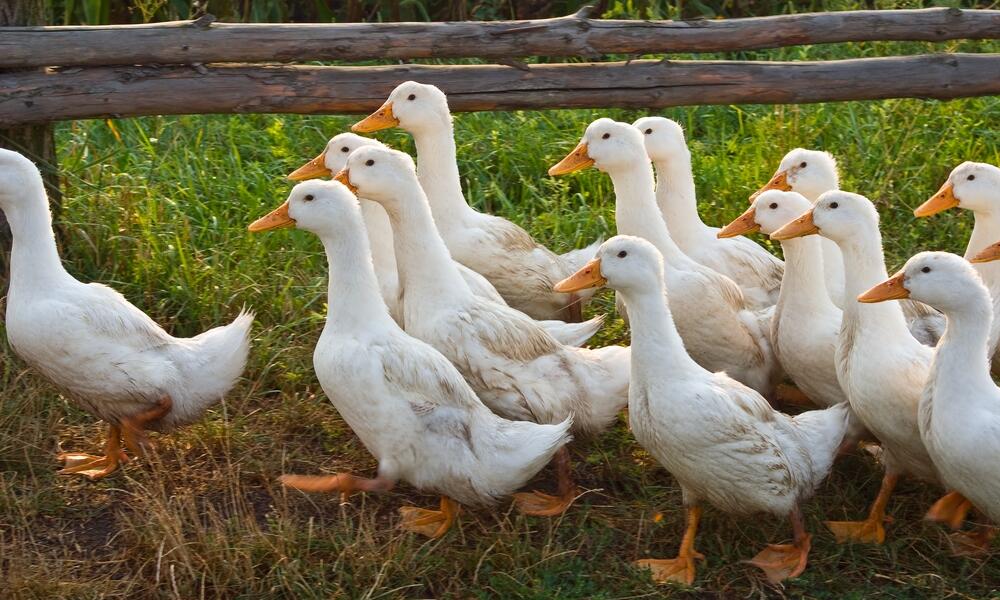 Chris Berry follows the continuing revival of a traditional favourite

Packed with flavour, rich, dark and succulent it's hard to imagine that goose lost its way in the nation's heart some years ago, but it has come back with a bang and Farmison's goose growing farmers are leading the way in producing top quality, traditionally reared free range, herb fed white geese from the Yorkshire Wolds.

BBC Radio 4's flagship drama The Archers responded to the rapidly increasing market for goose at Christmas by including two new characters, the Fairbrother brothers Rex and Toby, who set up their own goose enterprise last year. The storyline that introduced them is said to have increased Christmas sales of goose by 5 per cent and the thrust in sales shows no signs of relenting.

Goose as the centrepiece on the Christmas dinner table was once commonplace and has once again become fashionable. There are some areas of London and elsewhere around the UK where last year's sales outstripped those of turkey. Indeed Farmison's own experience saw a surge in demand for goose that is already on the rise this year.

The goose renaissance that we are now seeing has been aided by today's leading chefs using goose more regularly away from Christmas and with a honk back to tradition it appears that the densely textured, intensely flavoursome goose will continue is upward trend for some time to come.

The geese sourced by Farmison, rather like the turkeys, have all matured in a slow growing, happy, peaceful environment where they have enjoyed the best in farming husbandry from Farmison's farmer growers.

Natural grazers, the geese sourced from the wonderful rolling hills of the Yorkshire Wolds have been fed well with fresh herbs included in their grazing to reach the level of plumpness that provides the tenderness and flavour of quality goose produce.

Goose growers spend a great deal of time tending their stock and tell of them being great characters, bright, intelligent and always looking after one another. One will often stand as a sentry while others sleep.

While often seen in another role as 'guard dogs' on a farm or for a domestic residence, and by that sometimes giving an impression of being aggressive they are also well thought of as pets and prove highly efficient lawn mowers. They like to sleep outside and during the summer goose growers try to ensure they don't get sunburned!

There are many breeds of goose around the world but the most common domesticated breed in the UK is the Embden. There are many crosses of the Embden that make up the UK's goose population. In addition there are many wild geese breeds.

Until the 20th century goose was regarded as the centrepiece for most Christmas dinner tables in the country. Charles Dickens' A Christmas Carol sees Bob Cratchitt with a goose at his festive table before Scrooge comes along with a turkey. The irony is that goose is now sometimes seen as the Christmas dinner of the wealthy.

Although goose has some way to go to catch turkey the increasing popularity driven by its succulent taste has seen the number of geese reared in the UK each year catapult from its lowest ebb of 100,000 in the 1970s to 250,000. There is every reason to believe this figure will continue growing year on year as more discover the succulence of goose for the first time!

Tenderness and flavour in other meats comes from the fat that melts when cooking and goose is no different, except for just how much better goose tastes when cooked carefully. Its taste has been described by goose growers and chefs as halfway between turkey and duck.

Farmison's goose growers work closely with leading chefs in ensuring that the plumpness that's needed is just right through traditional free range grazing, fresh herbs and a stress free environment. It's the work that is put in out in the fields that determines the taste on the plate.

Basting the breast and melting the fat into the meat keeps your goose tender and juicy, allowing you to fully appreciate its richness and succulence. Farmison's chefs are also on hand through this site with all the tips you need if you're a goose virgin! They will also help you with how to achieve that salty, crispy golden skin and how to make the best goose fat and rich liver pate you will ever taste!