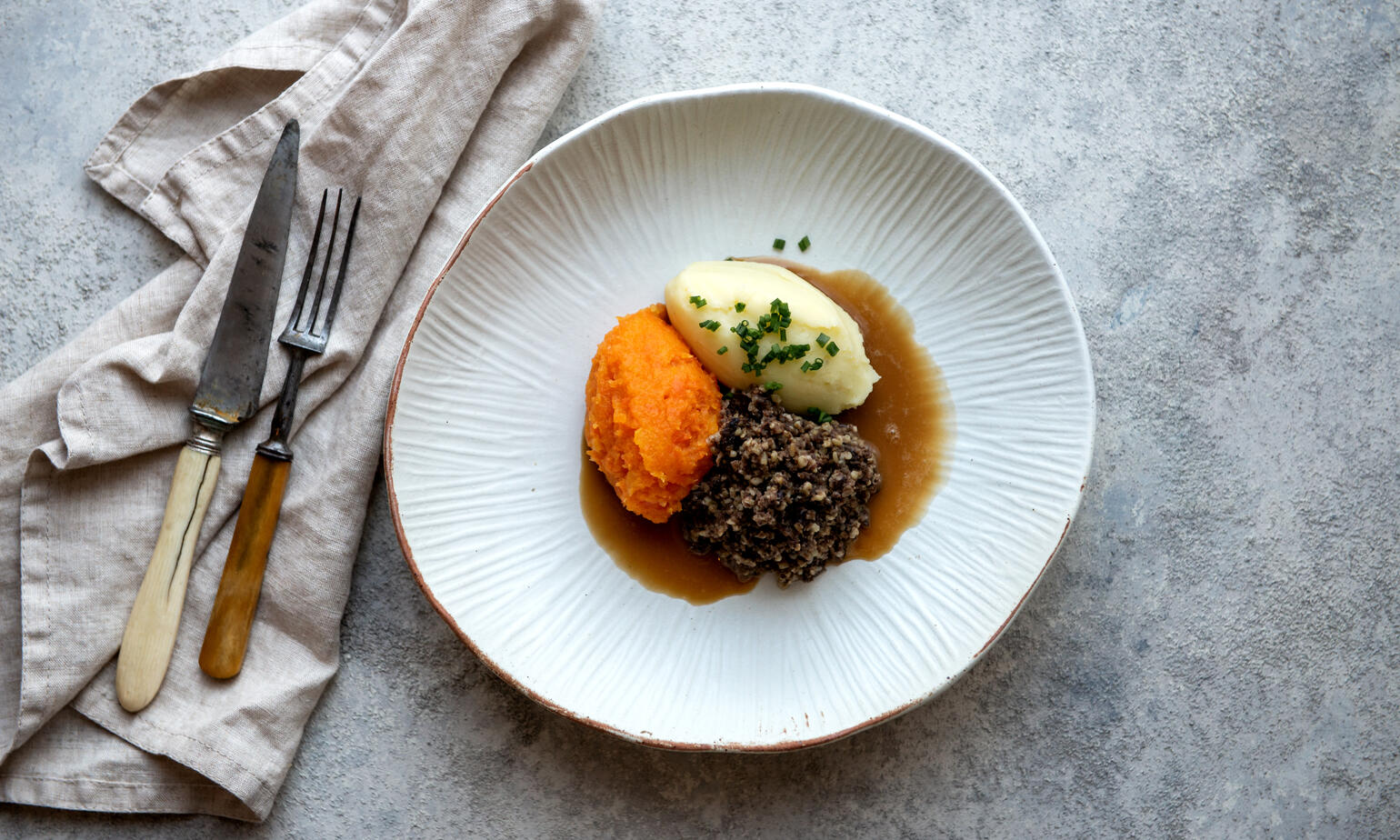 Burns Night celebrations can join together family and friends in reminiscing all things Robert Burns. Robert Burns (commonly referred to as Robbie or Rabbie) is the land of the thistle's national poet. So what better time to claim a family link to Scotland than on January the 25th. Even if you don't have a connection to Scotland, you can still celebrate Burns Night like a true scot.

Burns Night celebrations have become known all over the world as a festive occasion with the haggis as its centrepiece. This traditional Scottish delicacy is often piped in by a bagpiper, playing a Burns tune, while all guests stand. Once the tune has finished it is followed by the recitation of the poet's ode Address to a Haggis.

Why is Haggis Used in Burns Night Celebrations?

Haggis is known for its nutty, savoury flavour and continues to welcome and surprise those who have never experienced its delicious taste. Such has been its increasing popularity that Farmison & Co's Michelin Star chef Jeff Baker now includes haggis in another delight of Heritage Lamb Saddle along with Old English herbs.

'You really don't know what you're missing if you've not tasted well produced haggis,' says Farmison & Co founder John Pallagi. 'It is a delicious dish that continues to astound those for whom the ingredients don't sound particularly appetising, yet it really is one of the most unique, flavoursome delights - and on a Burns Night there's really nothing else that comes close.'

Handmade Haggis is Farmison & Co's tartan-based culinary delight. It features mouth-watering lamb that is traditionally made up of what is referred to in Scotland as sheep's pluck of heart, liver and lungs minced with onion, oatmeal, suet, spices and salt mixed with stock and cooked encased in the animal's stomach. Although it is now more often artificial casing. Using meat from the Cheviot & Jacob lamb breed, this is heritage breed haggis like you've never tasted before.

Chris Berry takes a wee dram of a look at the history and tradition of haggis.

But is haggis really a Scottish dish?

Debate rages over haggis's origin and the truth is there is no clear defining moment when it can be said haggis was born truly Scottish. Indeed the first textual references of haggis come from, and whisper it softly, the Sassenachs south of the border!

Folklore has it that Scottish cattle drivers bound for Edinburgh with their cattle set for sale at the market would carry the equivalent of today's snack box in the form of a haggis. Their women would have prepared the ingredients encased in a sheep's stomach for ease of portability and transportation, but the jury is out over country of origin.

The first known recipes for the dish were made with offal and herbs. These recipes for haggis (then spelled 'hagese') appeared in a cookbook dated around 1430, in Lancashire. Following this, another recipe appeared around the same date but with the spelling 'hagws of a schepe'. This is the very reason why Farmison & Co's traditional dish for Burns Night celebrations is Handmade English Haggis using lamb from heritage breed sheep from the Red Rose county.

Order of play at your Burns Night

If you're attending your first Burns Night or you're attempting to run your own this is the typical order of events:

The first Burns Supper was held by his close friends at Burns' Cottage on 21 July 1801. The fifth anniversary of his passing. When the Burns Club founded in Greenock in 1801 they held their first Burns Supper on 29 January 1802 thinking it was his birth date. It was later discovered through the Ayr parish records that the date was 25 January and Burns Night has been on this date since then. Robbie Burns was born in Alloway, now a suburb of Ayr in 1759.

The piping in of the haggis traditionally includes the cook bringing the meat in on a large dish, generally with a piper playing the bagpipe leading the way to the host's table. Some of the songs Burns wrote are usually played to accompany this celebration. Popular song choices include "A Man's a Man for A' That" or a medley of tunes.

To accompany your haggis for a Burns Night celebration, you can serve tatties and neeps (mashed potato and mashed swede). Soup is usually presented as a starter, including Scotch broth, potato soup or cock-a-leekie. To finish the celebrations, the speeches are often light-hearted and humorous.

Throw Your Own Burns Night Celebrations

Burns Night can be celebrated by all. With good food, good company and a host of traditions, what could be a better night. Ensure your event is a success when you buy high quality meat and produce from Farmison. Working alongside some of the best farmers and suppliers in the world, you can be sure to taste the difference in flavour and have full traceability over where the meat was reared. So Eat better meat this winter and treat your family and friends to slow reared meat.