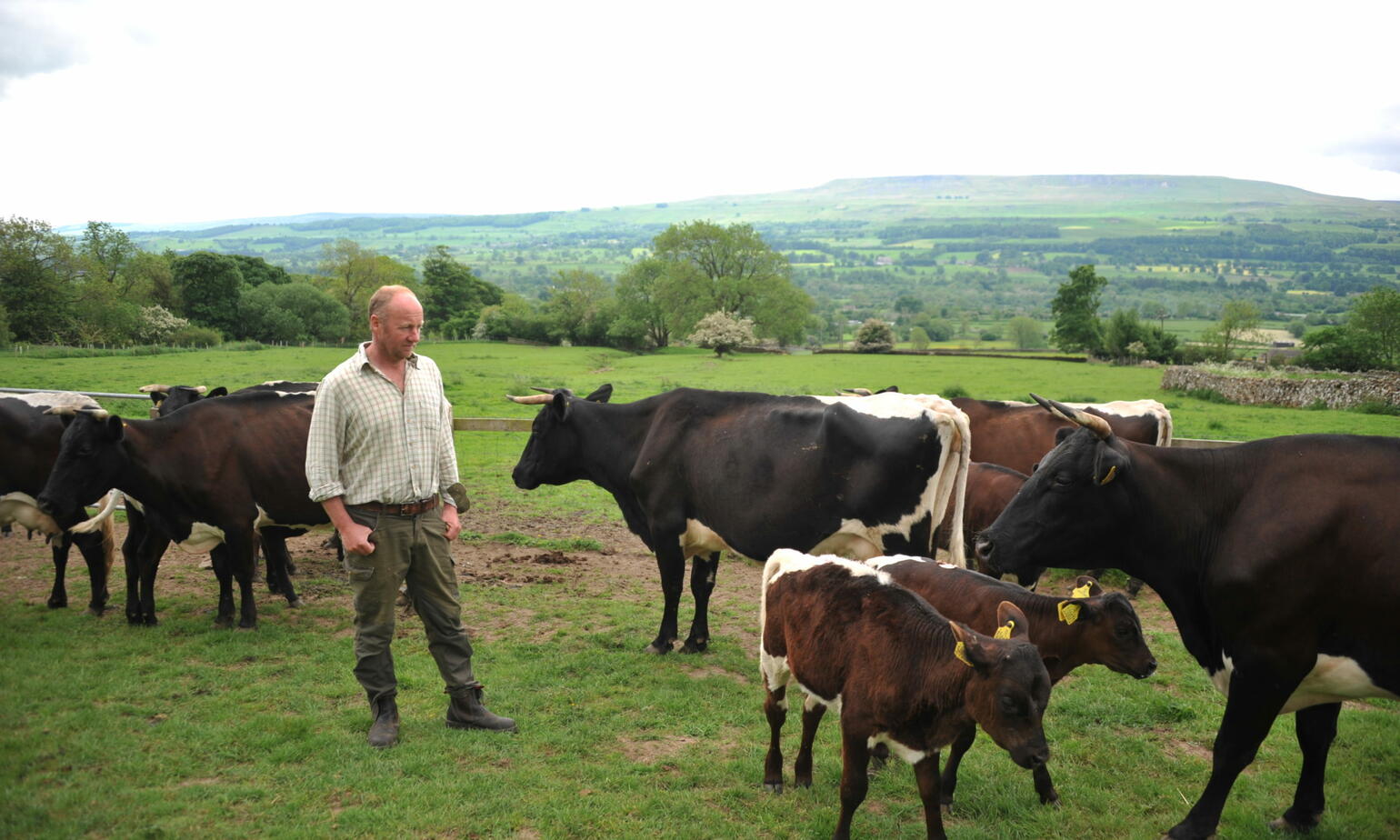 Greetings from the Dales, where rain this week has given the landscape a good drink after weeks of hot sun. My update this month relates to the National Food Strategy, the structure of the food supply chain in this country, and how this must change.

When I met friend and supplier Stuart Raw a few weeks ago at Castle Bolton, he had news. Some days before he had received a phone call - a herd of rare breed Gloucester cattle were going to slaughter. Sadly, rare breeds remain a labour of love for many enthusiasts and when times are tight, they can be sold at short notice, even for slaughter.

"You want 'em?" asked the caller, who had heard through the grapevine of our efforts to boost the rare breed White Park "I need an answer now." Time was of the essence to save them, otherwise they'd be lost forever. "Absolutely," said Stuart.

With your support, we will finance Stuart to grow this Gloucester herd, just like we have with the White Park herd.

Strikingly beautiful, with distinctive horns and a stripe of white on their brown-black hides, the seven cows and eight calves will graze on the valley bottom. This is more akin to the environment they were developed in over hundreds of years, the fertile plains of the Severn Valley.

The foundation of the two herds in Wensleydale is a challenge to the homogenisation of food, and a definite exception to the norm. Building a supply chain from scratch to allow for nuance has always been central to what we do here, but we are outliers.

We like to commend ourselves on the overall quality of British farming, and some praise is justified. Our animal welfare standards are high by global standards and land use is often efficient. Yet the mass, homogenised supply chains are utilitarian: they feed the greatest number of people, for the lowest amount of inputs. A handful of high-yield cross breeds dominate.

Food is squeezed, and this is reflected in British diets, our health, and our attitude to food. Obesity rates are through the roof, we tend to eat the same dishes over and over on the hoof, and all the while we spend relatively little of our disposable income on food compared to the great food nations of Europe.

Certainly, a rethink of British food is needed. All the above points are captured in Henry Dimbley's National Food Strategy as chief concerns. 'The Plan,' the latest publication, as the UK grapples with the big questions regarding food supply.

Dimbley's recommendations are timely, and well worth a read, though the report's mediating big picture approach undermines it. Here in Ripon we've built our business on being disrupters and putting the home cook at the heart of everything we do. While I applaud much of the report's conclusions, when looking at the advisory panel, the roster of big business inputting into 'The Plan' jumps out to me. Many road to Damascus moments have occurred recently, it seems.

My chief concern though is the lack of cut through to the consumer on key issues. I know from talking to customers up and down the country, they want to do right.

For instance, the report says we need to eat 30% less meat. Is that processed meat from who-knows-where, or is that free range ethical meat like ours? Putting a top level percentage on consumption is challenging, but my view is the consumer - and a balanced diet - must come first. If we're going to talk meat consumption with the public, eating better meat has to be front and centre of the conversation. The truth is, it's easier for business to tout a cheap vegan substitute for cheap meat to keep your margins healthy, than to tackle the system root and branch. We have spoken to a number of grocers recently at a strategic level, but they do not understand the supply chains they rely on. Meanwhile, vegan substitutes of dubious nutritional value are not going to change the nation's unhealthy relationship with food.

In a similar vein, is the issue of tree planting. The report argues large areas of pasture needs to be repurposed for carbon sequestration, but a farmer will tell you is that it has got to be the right tree in the right place. Blanket approaches (in general) are not helpful, and I fear small farmers will be squeezed further by corporations looking to offset carbon emissions by buying up tracts of British land. A nuanced approach with farmers actually leading on these initiatives is preferential.

I'm often told, bluntly, we can't feed the nation on heritage breed, grass fed meat. For me that misses the point. The bigger picture is that we can do things in a better way without those mass supply chains that almost destroyed our heritage breeds. In turn, I am often amazed at the lengths people go to, to defend a system that's failed us on so many levels. It's the complexity, I think, that scares people, but heritage breeds like our fledgling herd of Gloucesters must be part of the answer.