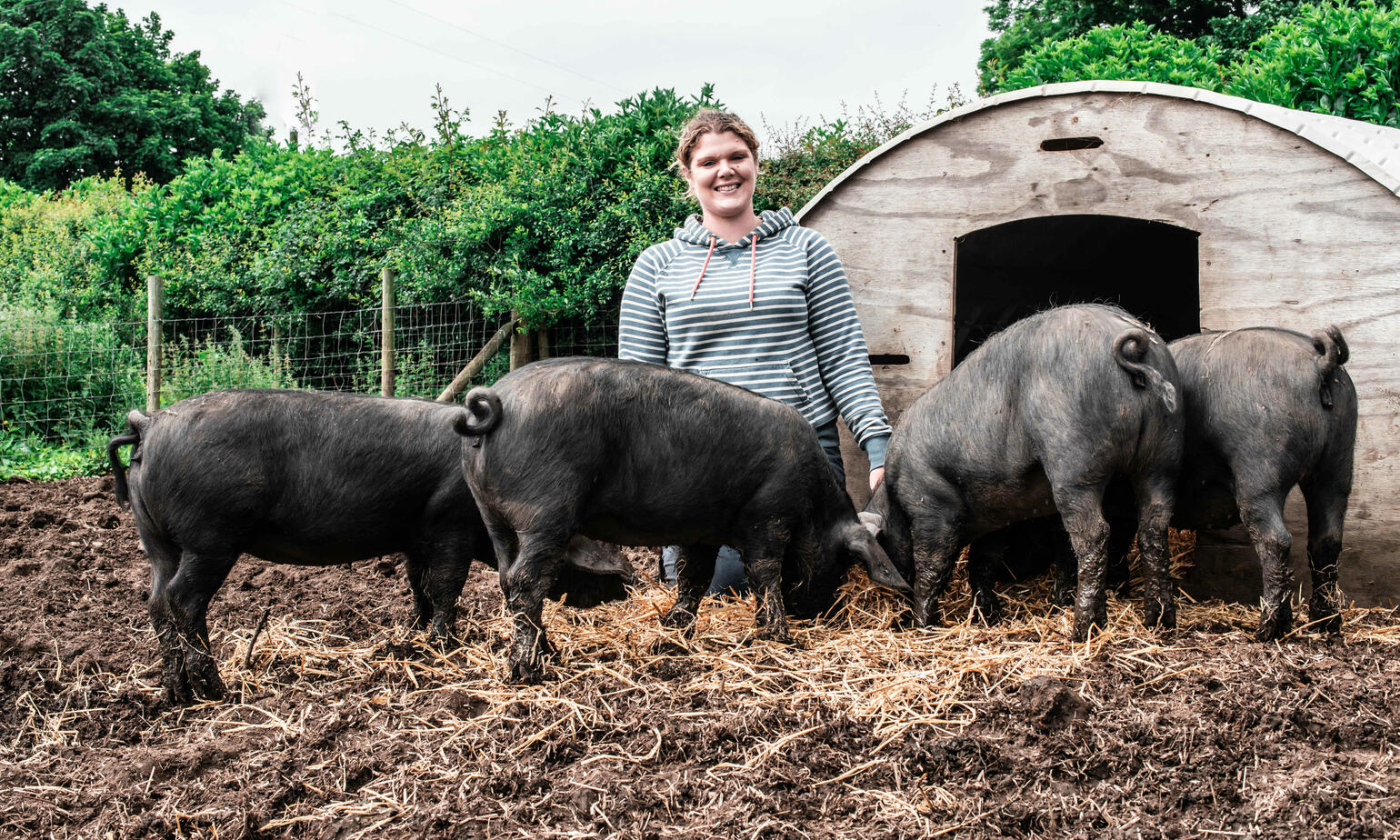 It's a fact of life that pig, sheep and cattle breeds generally only reach the endangered lists with the Rare Breeds Survival Trust (RBST) if their breed is not being farmed regularly enough for the food chain.

One young lady living in the beautiful, rustic village of Ellingstring between Masham and Leyburn in the Yorkshire Dales is ensuring that the UK's most historic heritage breed of pig, the Large Black is given the opportunity to thrive once more and Farmison & Co shares her commitment by offering the incredibly juicy, mouth-watering taste of pork reared in a healthy, stress-free, outdoor environment.

Rowan Simms is no ordinary farmer and her love of all animals was evident from 4 years old when having packed her teddy bear suitcase with a pair of socks plus her teddy bear she set off to 'save the seals'.

'I'd seen on the news that seals were getting killed for the fur trade and was outraged. I wanted to join those who were trying to make sure it didn't happen. I'd packed my case and was at the door when mum headed me off. I have always been passionate about animal welfare and avidly read the RSPCA's Animal Action magazine as a child.'

'We moved from the south coast to Yorkshire when I was 11 years of age and my mum and stepdad had a Good Life menagerie of chickens, a wild turkey, goats, sheep and a Large Black pig called Harriet. They grew a Large Black herd called the Meadowsweet herd.'

The birth of Rowan's dream to save the breed farming, but the breed remained a passion and in 2010 she and then soon-to-be-husband Tom purchased their first two Large Blacks. It was a step into the unknown for Tom and he was soon to find himself looking after them on his own.

'I'd just thought we could rear a few for the freezer and bought two from Manchester. We brought the two boys back in his VW Golf, in a little dog crate, and of course they did what comes naturally when you want to go. Tom wasn't impressed.'

If that wasn't enough Rowan then won a scholarship travel award to go to New Zealand. Tom was left not at that time holding the baby but two baby pigs. Rowan still smiles at the thought.

'He hadn't farmed in his life and I suppose it tests your relationship a bit, but we survived, married and now have two lovely children - William and Philippa.'

'I'd known the Large Black was an endangered breed when we'd had the Meadowsweet herd, but what I hadn't realised until I looked at the RBST website was how much more in danger the breed had become between 1999 and 2010. It is currently classed as 'vulnerable' with just 200-300 breeding sows left in the UK.'

The Afton herd of Large Blacks 'We are really concerned about the breed's future and the only real way it can have one is if the pork is consumed more regularly. The meat produced is amazing featuring a rich taste and tenderness through fantastic marbling brought about by moist fat content and for me there is no crackling like it.'

'We're doing all that we can to maintain the breed's boar and sow lines. There are just six remaining boar lines and twenty-four sow lines and we travel the UK to ensure they are kept alive. We have the Queen and Grandeur lines amongst our Afton herd and we've been to Essex for a Defender line; to Scotland for a Nocturne; and we've had other breeders bring sows to us for covering from Newcastle, Blackpool and Warwick.'

'There are lines that you only find in certain regions like Somerset and it is really important that all breeders work together to ensure we don't lose any more. That's why we are delighted to have begun a working relationship with Farmison & Co who share our commitment to maintaining heritage breeds.'

'UK native breeds were popular for a reason years ago. They were in much greater numbers because it was a time before intensive farming methods took a hold. I honestly believe that when Farmison & Co customers taste our pork they will be suitably impressed. Tom and I care so much about the breed, but we also know why it should once again be gracing restaurants and the dining table - and that's how we can all help because greater demand will get this breed well and truly back on its feet.'

'Large Blacks live outside, they are natural foragers and very efficient feed converters, they adore windfall apples we receive from a walled garden orchard and we have plans for an orchard of our own. They live longer lives than other pigs enjoying exercise and thriving in the free roaming, stress free environment provided by the beautiful Yorkshire Dales countryside.'

Farmison & Co is delighted to be assisting in Rowan's quest to save the heritage breed of the Large Black pig. It is part of the company's ongoing relationship with producers who are seeking to maintain and improve numbers of native pig, sheep and cattle breeds.

Co-founder, Lee Simmonds, is excited and enthused by Rowan's commitment and determination to ensure Large Blacks are around for many years to come.

'Rowan certainly believes as we do that the only way to preserve traditional, native, heritage breeds is through the ability of breeds such as the Large Black to produce a tasty, mouth-watering, succulent product. We are confident it does just that and our customers will enjoy pork that they've either never tasted before or not for many years. Heritage breeds don't have to be in danger of being lost if we all just realised that the meat from them is so exceptional. We find Rowan's spirit and enthusiasm for the Large Black pig so invigorating.'