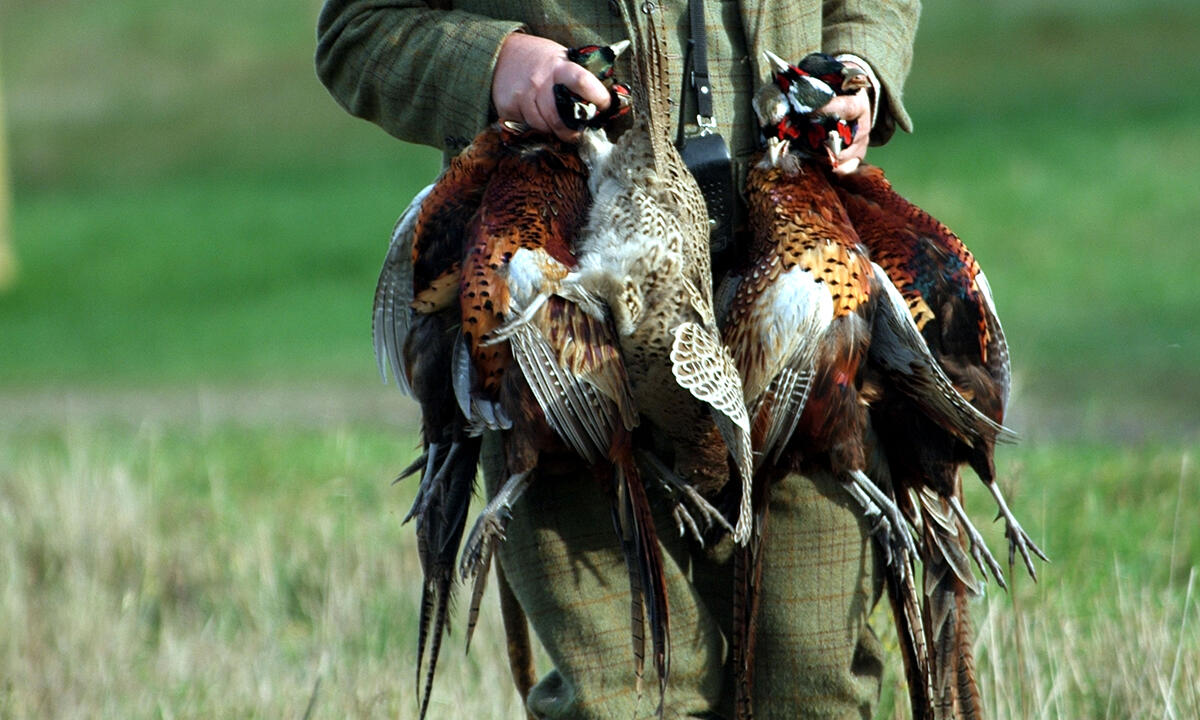 The Glorious 12th or indeed the Glorious 13th this year due to the famous date having fallen on a Sunday signals the starters orders for the new shooting season when red grouse are under way, followed by partridge on September 1 and pheasant October 1.

Although this is the headline time for gamekeepers to be once again thrust into the public eye their work is of an all year round nature and today their combined roles as game growers, conservationists, predator controllers and moorland restorers sees them marked by some as guardians of the countryside and others who are against shooting a good deal less complimentarily.

Nick Lister of Ox Close Traditional Fine Foods near Wetherby that specialises in supplying game to Farmison & Co talks with gamekeepers throughout the north of England and further afield every week and explains some of the more recent pressures they are facing in maintaining and improving the quality of their birds.

'We are looking for only the best quality birds for our customers that as well as Farmison & Co also include high end restaurants and top chefs, plus growing markets in Belgium and Holland and we will always go where the birds offer us real value. Gone are the days when you will take everything from a shoot. We will only take what we feel is fit for human consumption and will create great food on the plate.'

'This year has been particularly challenging for gamekeepers over the very warm spell ensuring water is supplied not just for the game birds but all other birds such as lapwing and curlew.'

'They really do a fantastic job and our business and that of many others would be lost without them. They keep the countryside right while also having to cope with increasing hassle from a small minority of the public.'

Red Grouse are prevalent in the higher regions of northern parts of England including Yorkshire, Cumbria, County Durham and Northumberland across The Pennines, Yorkshire Dales, North York Moors and the Peak District. They feed on the shoots, seeds and flowers of heather while are also partial to berries and cereal crops. They pair in autumn and the female grouse produces typically 6-9 eggs with their young ready to fly at 12-13 days and fully-grown by 30-35 days.

Grey Partridge and Red Legged Partridge are found in greater numbers on shooting estates than anywhere else. They nest in the margins of cereals fields. Numbers other than on estates have declined massively. They typically lay 14-15 eggs and the young partridge flies properly at 15 days. The reason for the decline specifically amongst grey partridge is a direct consequence of the overall decline in the insect population that young chicks thrive on. Red legged partridge has become more common on shoots than grey partridge.

Pheasant makes up the largest proportion of all bird game through Nick Lister's Ox Close Traditional Fine Foods and has a significant value to the rural economy. Many woodlands have been planted to provide cover for the birds. Pheasants lay anywhere between 2-22 eggs and typically lay 8-15. Their young hatch between April to June and fly at between 12-14 days. They reach adult resemblance at around 15 weeks.

Pressure is one of the main themes for today's gamekeepers. Over recent years I have interviewed Jimmy Brough and Michael Wearmouth on the Rosedale & Westerdale Estate in the North York Moors; Jim Sutton of Woodhead and Snailsden Estate on the South Yorkshire/Peak District border; and David Gay on the Carlton Towers Estate near Goole. They all face increased demands, greater emphasis on quality of birds, dealing with poachers and propaganda from those who would like to see shooting banned.

Jimmy Brough and Michael Wearmouth who manage the moors for grouse and pheasants tell of how the gamekeeper's role has changed during their time:

'Years ago we got on with our job quietly, but it has got to the stage now where we can't be quiet any longer. We are now actively trying to show everyone what we do rather than what some people try to say we do. We manage the moor and yes, we manage it for grouse but the spraying of thousands of acres of bracken helps all wildlife. The bracken if left to its own devices would have taken over the whole moor and it would have been a wilderness. Burning of heather is another important element and can only be undertaken in a controlled period when it is dry between October 1 and April 16. You burn heather to regenerate young heather which is how grouse thrive.'

'People talk of us destroying everything just so the grouse can be here but that's not it at all. Obviously jobs are dependent on grouse but we keep vermin down by controlling such as stoats and weasels that are predators not just of grouse but also songbirds and other species. We control without eliminating the vermin.'

'We find the lion's share of the general public are fascinated by what we do and they don't realise that a lot of footpaths and tracks would not be maintained if we weren't here. Once we talk about our work people realise the moors don't just appear the way they do without a good deal of care and attention. Until then they just think it's a beautiful part of the world that stays the same regardless of whether we are here or not. The quality of the moors and other moorland elsewhere is far improved through the work of gamekeepers - and we are proud of our grouse.'

'Being a gamekeeper was all I ever wanted to be,' says Jim who has been a gamekeeper since leaving school, firstly with his father in Northumberland before moving to the neighbouring Lilburn Estate as under-keeper, followed by a move to Swaledale on the moors at Reeth and Gunnerside and a move back north to the Scottish Borders between Kelso and Berwick as head keeper for five years.

Jim took over as head keeper where he is today at the Woodhead and Snailsden Estate near Dunford Bridge running to the top of Holme Moss and with land also in Derbyshire and tells how his gamekeeping life works out.

'My job was initially to get the rundown moor here back up to scratch and one of the first stages was to get heather back on the moors. The bottom end of the moor had been historically over grazed with cattle and we also had sheep on the hills. That area was fenced for three years to allow the heather to regenerate, but then the grasses started to overtake the heather so we brought the sheep back to control the grass. We also needed to undertake bracken control.'

'When it comes to grouse moor management you have three or four primary activities that will be most influential - predator control of crows, foxes, stoats and weasels; habitat management improving the heather and moorland; and taking out quantities of grouse as the more you try to cram in the less is produced and having too many will bring about greater chance of disease. Stoats and weasels are particularly prevalent at nesting time when they raid taking eggs and chicks. Carrier crows and magpies take over from nesting onwards.'

'Being a successful gamekeeper is about benefitting all wildlife not just the red grouse we have here and getting the moors right is very satisfying. We've seen an increase in vegetation, the heather has recovered, grasses are coming through nicely and as our grouse numbers came to the level we wanted we also saw waders such as curlew, lapwing and golden plover and this year we've had four pairs of merlin which have fledged sixteen young, plus a peregrine nest which has fledged three young. It has all come together. We also have a few English partridge on the fringe of the moor and work alongside Moors For The Future which is all about restoration work and is a driving force in the Peak District.'

David Gay was born in Hull, son of a trawlerman whose pastime was shooting rabbits and wildfowl on Spurn. He made his way in gamekeeping having studied countryside management at Askham Bryan College near York and deer management at Spasholt College in Hampshire. He's worked for Lord Lambton at Lambton Park in County Durham; for the Duke of Devonshire at Bolton Abbey Estate in North Yorkshire; and at the prestigious Chatsworth Estate. He's been with Lord Gerald Fitzharland-Howard at Carlton Towers Estate, part of the Duke of Norfolk's Estate since Chatsworth.

'We have traditional old fashioned partridge here and at certain times of year a 20 hour day for a month and seven days a week is the norm. My typical day starts at 5.30am and can include dependent on time of year checking traps, fixing machinery, cutting game crops, tending strips of wildflowers, checking everything everywhere, back in for 4.30pm and a ride out at 6pm-7pm and at 10pm, which is when poachers tend to turn up.'

'The hard work really starts the day after the shooting season stops on February 1. We're very conservation-minded and have lots of small wild birds including goldfinch, bullfinch, yellowhammer and a large lapwing population. We promote wild birds by feeding all year round. There are also buzzards, harriers, barn owls and kestrels and every single bird on the estate gets to feed on our specialist partridge mixture. Every field is surrounded by 2-6 metre grass margins that provides the insect bed for the chicks' larder.'

While David is used to the long hours and has no problem with the work that goes with ensuring wildlife and sufficient partridge he tells of how life as a gamekeeper in an area closer to the urban fringe can change opinions about the carefree life some may envisage.

'This estate is beautiful but forty per cent of my time is spent on security. There is a massive amount of stress. It's not amiable poacher rogues depicted by characters on TV series like Emmerdale or Heartbeat, I've had shotguns pointed at me, been thrown down ditches and been rammed and pushed off the road. They're the things you don't see about our job.'

'Yes, it is wonderful when we are talking about wildlife, maintaining the habitat, ensuring the numbers of game birds and I'm a firm believer that we are the best conservationists in the UK. When you are managing for game you're managing for wildlife.'