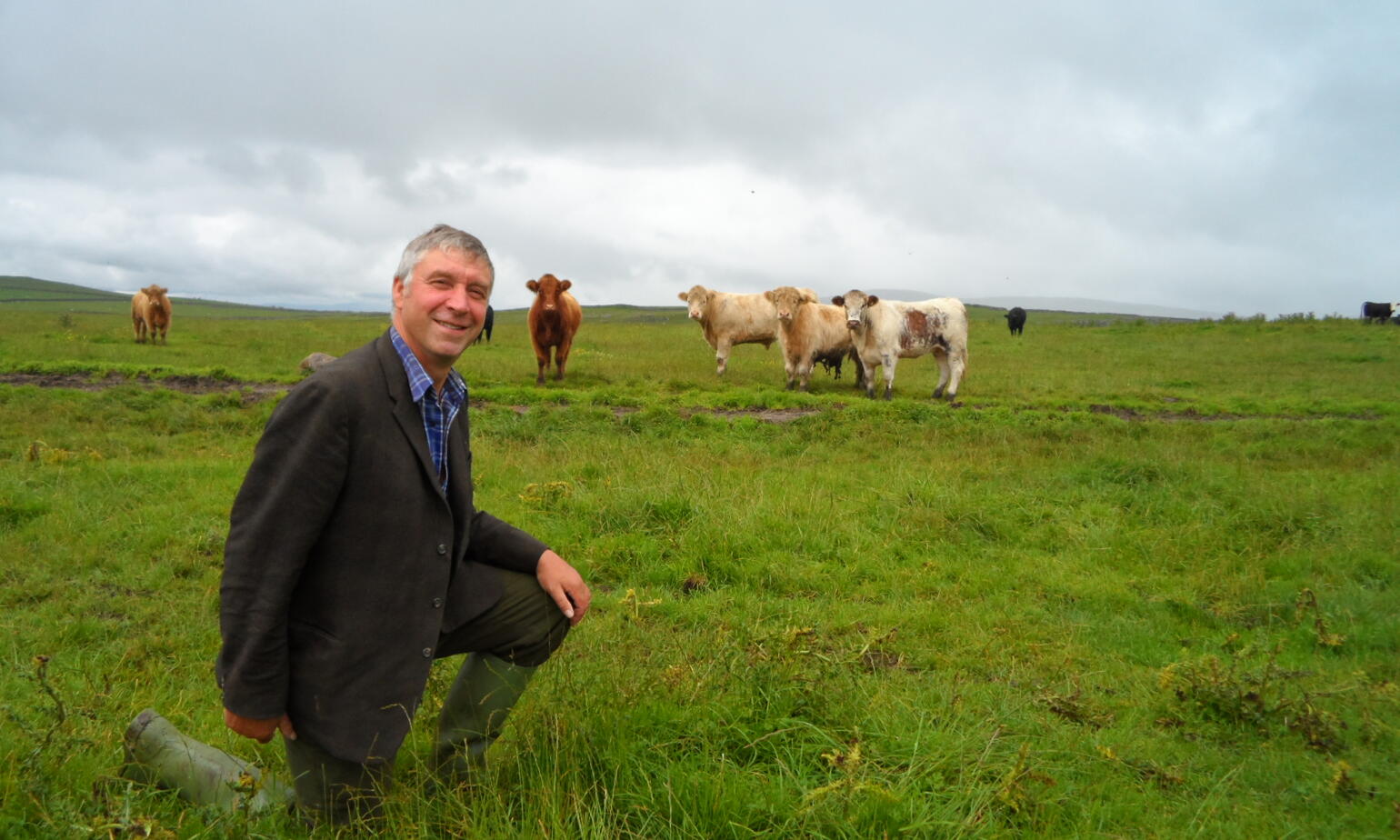 Chris Berry talks with the latest partner for Farmison & Co

Frank Carr is one of our latest specialist native beef producers to join the Farmison & Co family. He farms at Lee Gate Farm two miles out of the village of Malham high in the rugged and beautiful Yorkshire Dales National Park hills where his grandfather Henry Carr first arrived in 1927 and where his father (also Frank) used to go to school on a donkey. Today Frank is in partnership with his brother Norman and his brother's wife Christine.

The farm at Lee Gate is in the Malham & Arncliffe SSSI (Site of Special Scientific Interest) and is closely monitored by Natural England to conserve both wildlife and geology. This is truly wonderful countryside where one of the objectives is to reintroduce and further encourage native breeds of cattle in order to maintain the landscape and enhance the grass. It's a happy marriage of conservation through traditional farming methods that ensures the future of rare and traditional native breeds.

Frank runs a herd of 250 breeding cows with the majority being traditional breeds including Highland, Shorthorn, Longhorn and Hereford. He also has pedigree native breed bulls.

We are delighted that Frank has chosen to join our Farmison & Co family. He is highly respected in the Yorkshire Dales farming world for his animal husbandry and ability to produce quality grass-fed beef from the hills. He understands the type of meat you are looking for and believes that traditional native and rare breed beef has a special place in the hearts of most beef lovers.

'Beef production is all about ensuring you have the right product for the right market place. If you're keeping native breeds it is vital you have professional, well regarded outlets where there is an understanding of the exceptional flavoursome taste that comes from well tended animals.'

'Current trends show that there is a growing market for grass-fed, traditionally reared British breeds that produce succulent beef from the hills. We work closely with Natural England and I hope that through joining Farmison & Co's supply team even more consumers throughout the country will come to realise that as well as having have the good fortune to live in one of the world's loveliest places, we also produce beef that you will love.'

Lee Gate Farm's traditional native grass-fed beef is already in strong demand through local butchers in North Yorkshire. Frank believes this is all down to taste and the stress free environment of the Yorkshire Dales countryside.

'We are constantly being told that our beef eats very well. It's down to the marbling and maturity of the beef as well as the hanging time."

'Native grass-fed cattle take up to 30 months to reach the quality beef we're looking for and it is important for them not to grow too big. I check the whole herd making sure they are fit, well and happy cattle. I also watch closely for their optimum maturity. It's all about ensuring that taste and juicy tenderness makes you come back again and again.'

Highland, Shorthorn, Longhorn and Hereford cattle have long been regarded as four of the UK's most historic breeds. The Highland is one of the oldest and possibly purest breeds. Its long, thick, shaggy coat has given it the reputation of being one of the hardiest cattle and its hard to argue with the fact when the wind is blowing a gale and rain, snow and hail are falling while the Highland stands in the face of it all.

The Old English Longhorn was prevalent in the Craven district of Yorkshire and in southern Westmorland. It was cattle breeding pioneer Robert Bakewell (1726-95) who transformed the breed into a fashionable commercial animal, however it slipped into obscurity for a long while and is now regarded as a rare breed.

Shorthorns took over in popularity from the Longhorn, eclipsing it fairly quickly in the mid-late eighteenth century. There are two breeds the Dairy Shorthorn and Beef Shorthorn. The Shorthorn started life in the north east of England and the most famous and influential breeders of the time were the Colling brothers from near Darlington. The Beef Shorthorn ultimately found its home in Scotland.

Herefords are among the most instantly recognisable of any breed with their white face. Its native county is sandwiched between the Welsh borders and Gloucester.

'I was always interested, particularly in livestock and I would have simply stopped at home and set off farming as soon as I could, but my mum said I should go to university. I studied agriculture at Newcastle and I've seen a bit of the world on visits to South America and Australia.'

'We've had some hard times but I've never wanted to do anything else and love it here. It's home.'

2001 saw the world change for Frank and everyone at the farm. Up until that time they had been milking 300 cows, had 800-head of cattle overall and 2000 sheep.

'That year changed everything. Ever since the 1970s Norman and I had gradually increased buildings and animal numbers. We'd always milked cows ever since my granddad's day when the milk was taken down to the railway station at Bell Busk that was transported into Leeds. We were no different to many others but over time most had changed to beef and sheep. Then Foot and Mouth Disease came in 2001. We didn't have it but the whole of our livestock was taken out as a contiguous cull because of a farm adjacent to us being extremely unfortunate in having it confirmed there.'

'We went from masses of animals to none in one fell swoop. We started again but without the dairy herd. Having taken the decision to buy cattle in to fatten we subsequently made the decision to go into producing our own cattle through the suckler herd we have now. In addition to our traditional native cattle we also have commercial continentals selling, which sell into large outlets.'

'We also have around 700 Mule ewes and 700 horned ewes that are Swaledale and Dalesbred. We've just started using a Teeswater tup on the Dalesbred to breed a Masham lamb, which is what we used to do 40 years ago but the breed fell out of fashion for many years. That's one breed Farmison & Co have been championing for a while now, as one of the best heritage breeds, and no doubt it will be available soon from us too!'