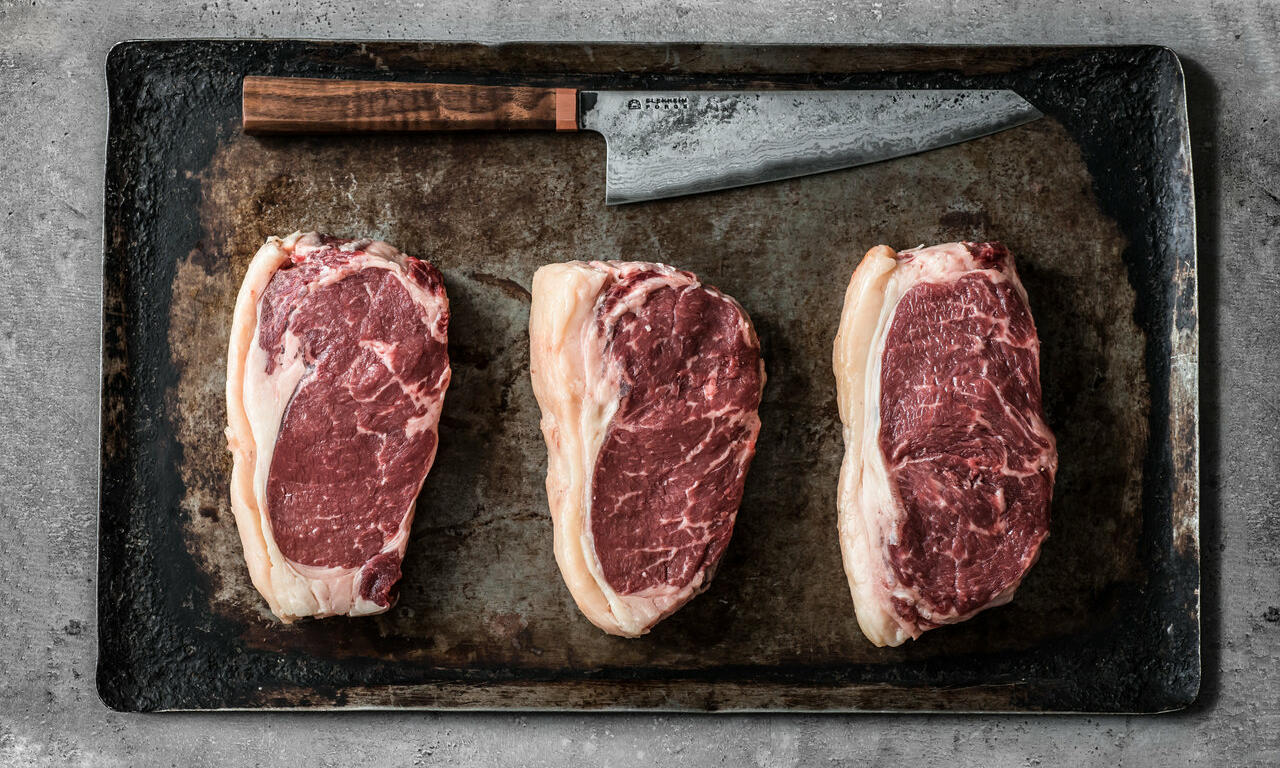 To be written about in the hallowed company of Scott's, Pauillac and Beluga of "favourite restaurant, best Bordeaux appellation, top caviar" fame made, to say the very least, our weekend. We had an inkling, when we invited The Times's seasoned Food Editor (excuse the pun), Tony Turnbull, up to Ripon for a "steak tasting" that he might well be enthralled by the different breeds laid out for him, but the real proof was in his article in Luxx, The Times' quarterly delve into all things "luxury".

Now Tony knows a thing or two about food… he's been penning and cooking, cooking and penning for eons now. So, when he arrived in our shiny new HQ and we asked him to do a taste comparison between eight different heritage breeds of 45 day dry aged sirloin steaks, he was momentarily stopped in his tracks. "you can never let your guard down, as I discovered when someone recently asked my favourite breed of beef for a steak. I'm sorry? Breed? That was a new one for me. I can do cut (sirloin); I can do grass or grain-fed (grass, obviously - do I look American?); I'll even have a bash at ageing (40 days or so, after that it can get a bit stilton-like). But breed had me stumped and my mind went blank. I knew I couldn't say Angus, which is like being asked your favourite car and saying a Vauxhall - it just isn't, ever. So I mumbled something about the way the cow was brought up being more important than who its parents were and moved the conversation on to the perfect chip."

Having completed the tasting, no mean feat in itself, he declared his winner to be "Dexter." He continued "I know that because I have just spent a fascinating afternoon with Andrew Carrington, the master butcher at Farmison, a North Yorkshire co-operative that supplies meat to the best kitchens in the country. They usually have about four breeds in stock - Angus and Hereford, the two most commercialised, plus a couple of heritage breeds - but he had lined up eight steaks for a comparative tasting, sourced from farms within the county."

Usually a man of few words, our Master Butcher, Andrew Carrington batted back Tony's questions with confidence and expertise "The British breeds lead the world. We are the home of the best beef, no question. It's about educating the public that, yes, good meat might cost more, but you don't have to eat so much of it." And, of his favourite Welsh Black breed, he sighed adoringly "just look at that beautiful fat."

Tony's thoughts were positively forensic when it came to differentiating between the breeds. "Only the Hereford would I describe as being out and out "beefy", the others displaying minerality (Lincoln Red); a gamey butteriness (Welsh Black); a sweet grassiness (Dexter); and a distinct savouriness (Belted Galloway). In the end it was a vote-off between the Dexter, the smallest breed in Europe, which was in danger of going extinct in the 1930s, and the slow-growing Belted Galloway, which is naturally leaner than the typical heritage breed."

A fascinating afternoon was spent talking through the breeds, much as sommeliers might discuss grapes. The pièce de résistance was his declaring Farmison's Dexter sirloin the "Hermès Birkin bag of the beef world". Praise indeed.