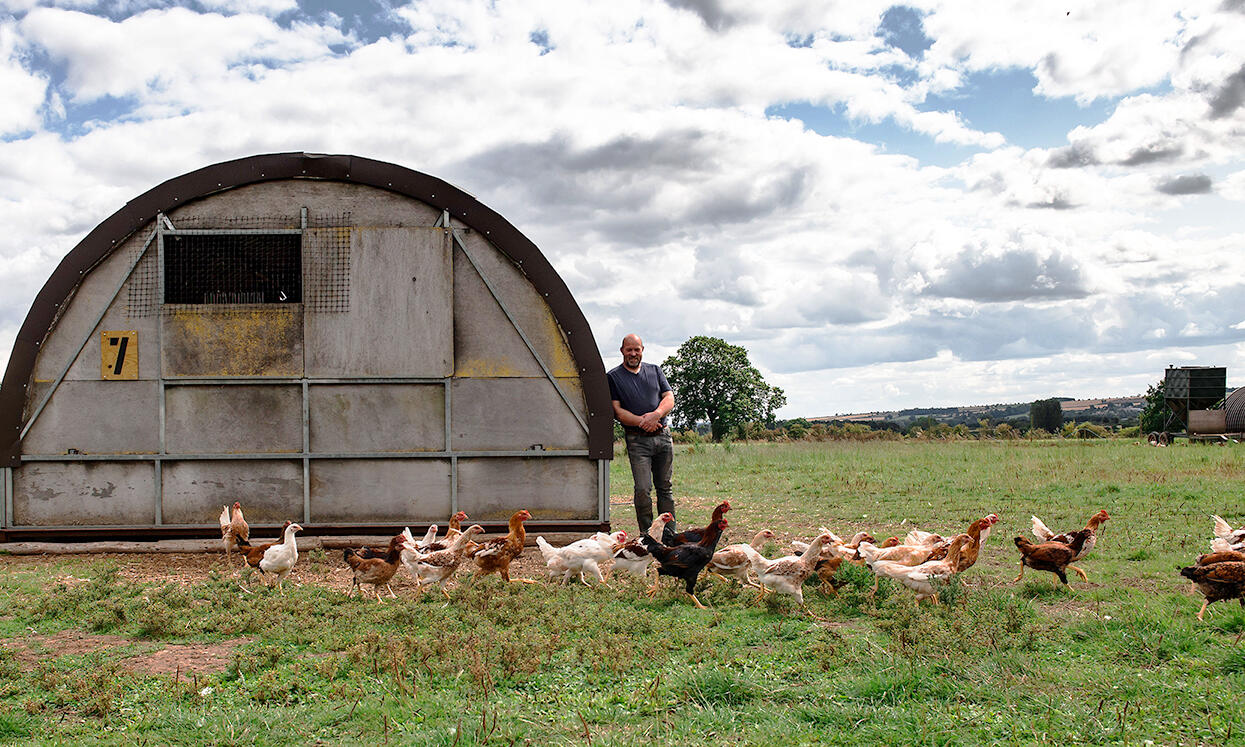 Chris Berry talks with Paul Talling purveyor and grower of chicken in their natural environment in North Yorkshire.

Chicken is the most consumed meat in the world and yet often the most harangued. While it ticks the boxes of the healthy eating generation to many eyes and mouths it has also become largely referred to as bland without the addition of sauces, salt, pepper and garnishes.

Cornishman Paul Talling rears what people tell him is the tastiest, melt in the mouth chicken they have ever experienced from his 35-acre Kensa Park farm in Harome near Helmsley in North Yorkshire - and he's on a mission with Farmison & Co to bring back the times before the rush for mass production, quick turnaround commercial chicken started taking a hold in the late 1940s.

'If you have one of my chicken you don't need anything else with it as you can taste the way the bird should be. That's because mine are proper free-range chicken that don't live in fancy huts with thousands of other birds where it is a really warm place with heating and food and water constantly supplied, which discourages them from enjoying a more natural life. My birds have real lives as natural as a bird should enjoy, out in the field and with shelters that I build for them. To my mind a bird should live as it was intended and for an age that produces real taste.'

'We had chicken on my dad's farm near the small Cornish fishing village of Boddinnick on the River Fowey and I would always be around with him, helping on the farm with our Devon & Cornwall Longwool sheep, South Devon cattle, milking herd of Friesian cows, turkeys, chicken, geese and arable land. I'd go with him on deliveries each week taking vegetables and meat to local villages. I became familiar with how to rear quality chicken as a teenager and now at 50 I'm doing what I always wanted, running my own farming enterprise Loose Birds here at Harome.'

'What I've always known is that real flavour comes from age and that's why I've striven for a bird that grows a little slower than the commercial operators who are all about fast turnaround. One week extra can make a huge difference to flavour but getting to somewhere like a month to six weeks more brings a massive flavour impact.'

'My birds currently average around 12-14 weeks and I'm using the Hubbard JA57, which is a slow growing breed that produces a really nice shaped bird that thrives in a natural environment we have here at Kensa Park. Everyone who tastes my chicken says it is the best bird they've ever had. I'm happy that my chicken is the best in Yorkshire and North of England and I'd like to think it is the best in the UK. When it's pouring with rain I console myself with those thoughts.'

Paul isn't one to rest on any laurels though and has a passion for improving the taste of his chicken even further.

'I want to maintain and enhance the flavour. The larger chickens we prepare for the Christmas market are around 5 kilos rather than the 1.5 to 2 kilo birds during the rest of the year. They are larger or as large as most people's Christmas turkey and at 18-20 weeks old are the best chicken you will ever taste. That's because of natural, stress free lives they have led and their age. Like I say, age or maturity provides greater flavour as you find also in beef and lamb.'

'I'd love to rear chicken of 16-20 weeks old to the weight customers require the rest of the year which is around 1.82 kilos.' 'I'm bringing back some of the older English varieties of cockerel - the Indian Game (Cornish), Dorking and Light Sussex - and putting them to my own hybrid hens. The concept is that these birds were popular for producing the broiler chicken during the 1920s and 1930s. They were and still are slower growing varieties than the commercial chicken operations that are all geared to quick turnaround and consequently lead to less flavoursome chicken. My heritage bred, naturally-reared, free-range chicken will be packed with flavour and will come closer to the 16-20 weeks old mark that will provide that flavour smash.'

'John Pallagi of Farmison & Co had been to a top New York restaurant and had tasted chicken on their menu from a number of different US heritage breeds and he told me the taste was fantastic. I'm delighted we are working together to show the UK what chicken should really taste like and why naturally-reared, heritage bred chicken is set to become the doyen of the chicken world.'

Born a farmer's son on the Cornish Riviera Paul swapped south for north many years ago when his wife Janet, born and bred a farmer's daughter from Wensleydale took up a role as scientist at what was Defra's central science laboratory at Sand Hutton near York.

'When the family farm was sold and dad came out of farming I moved away and studied at the now defunct National College of Agricultural Engineering at Silsoe in Bedfordhire where I stayed on for my PhD. Janet was studying at a neighbouring college. I lectured at Otley College in Suffolk and when we moved north I taught at Askham Bryan College before taking on a role with Red Tractor Farm Assurance inspecting farms.'

Paul and Janet moved to Harome in 1997 and purchased land now known as Kensa Park, which means first field in Cornish, for Janet's horses.

'We had more land than we needed for the horses so we ventured into firstly pigs then ducks before starting with chicken twenty years ago. It's a fantastic feeling being back to where I was at 15 years of age, but now 50 and producing tasty chicken the right way.'

'My birds arrive as day-olds and spend four weeks in brood huts under heat lamps. I look for them to be properly feathered and to be eating what they will eat when they are in the field and inside my shelters before they go outside. I don't compromise on what they eat. Birds are genetically programmed to grow at a certain rate and slowing them down or speeding them up doesn't work because the birds then go wrong. I like mine to be robust, fit and healthy - and to enjoy a real heritage-style, stress-free environment. Here they can peck as they should, be natural foragers and still receive real animal husbandry including a healthy diet of wheat and barley.'

Bringing back the taste in both the US and the UK

American author Mark Schatzker's book The Dorito Effect was recently quoted in the New York Times extolling the virtue of heritage-bred chicken and analysing that when commercial chicken operations started around 1948 via competition to bring about more plentiful supply it coincided with chicken becoming seen as less delicious.

There was a story quoted by the New York Times of a lady from Kansas who had prepared chicken and dumplings for her husband for many years only to be met constantly with the phrase 'it's not like my mother used to make'. The lady had tried changing every combination of elements over the years to no avail but when she purchased a heritage-bred, naturally reared, non commercial chicken breed from Frank Reese of The Good Shepherd Poultry Ranch - a Barrett Rock - and prepared it for her husband with dumplings he was finally satisfied. 'Now that's like my mother used to make' he said.

Want to try one of our delicious birds? Head to the Farmison & Co. site here to purchase yours.