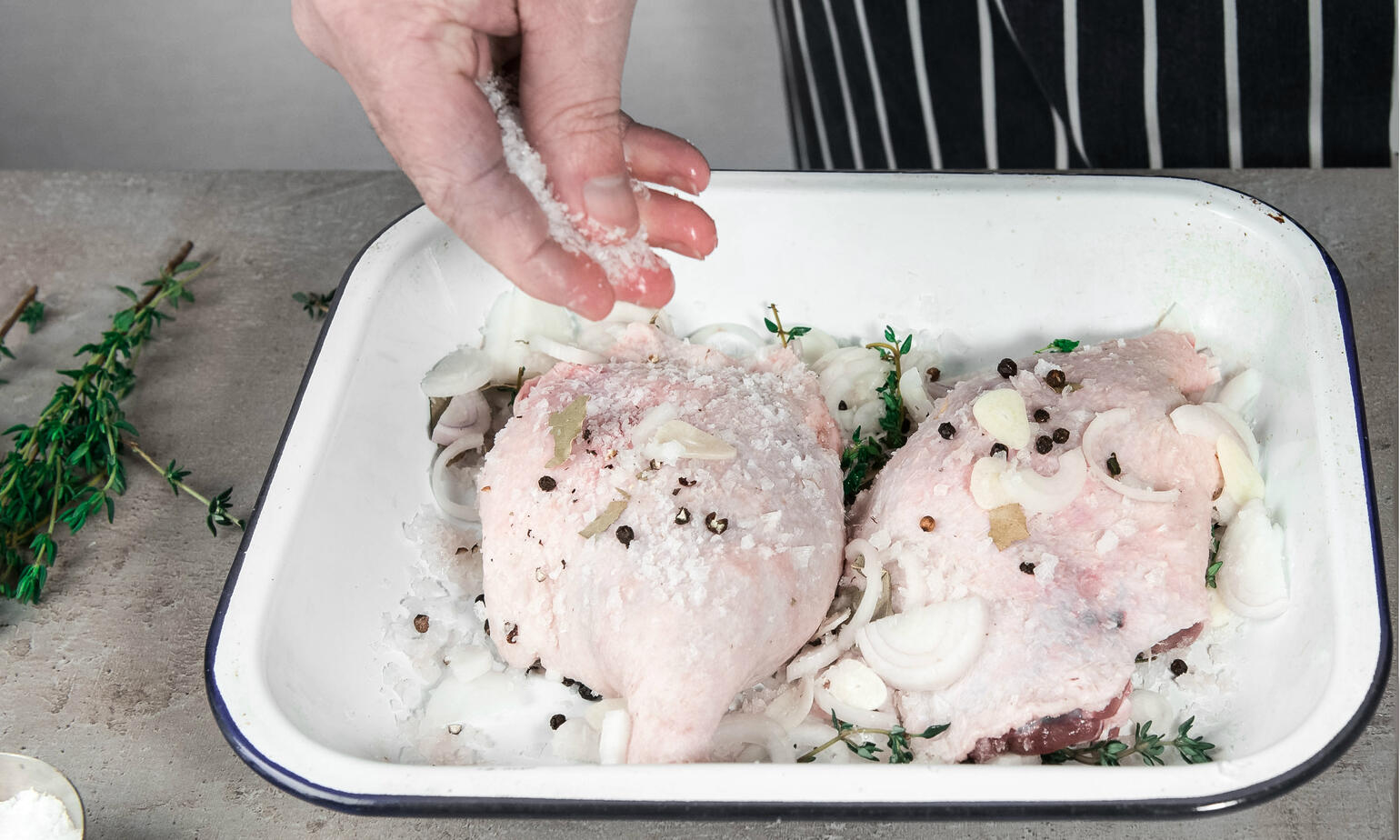 The word confit literally translates from French to preserve.

The method dates back many centuries where food was preserved to feed families in the leaner, dark months where produce may not be as readily available.

The method is a traditional way of preserving anything edible, though is now associated most commonly with preserved meats.

It refers to the method of cooking food in fat, oil or sugar syrup at a low temperature, with the fat/oil or syrup below 95°C and usually lower.

The slow cooking process breaks down tough connective tissues such as tendons and ligaments, which contain large amounts of collagen, which make the meat very tough. Collagen begins to denature at 60°C squeezing meat fibres together leading to a release of moisture. At 63°C collagen will begin to dissolve and turn into a rich liquid, gelatin creating unctuous tender meat.

When we confit meat the first stage is to salt the meat over a period of time, this will kill bacteria & draw excess moisture from the meat both flavouring & intensifying the meat.

Once the meat is 'semi cured' it's then fully immersed in fat or oil & very gently heated & cooked until the meat is fork-tender, remember the lower the temperature (above 63°C) the better the end result as moisture is locked in & keeps the meat juicy.

If the fat/oil gets over 90°C moisture will be drawn from the meat & will become dry & stringy.

Over the years I've found the best results to be cooking at around 75-80°C, being patient & letting nature do its own work, this can take many hours but the wait will be worthwhile.

Typically cheaper cuts of meat & poultry are used such as goose & duck legs, necks & giblets as well as pork belly & neck though pretty much anything can be confit.

Once the meat is confit it can be kept in sterile preserving jars for up to 6 months, the meat must be fully covered in the fat/oil it was cooked in & not disturbed.

A great alternative way to confit meat is to use the sous vide method, following the initial steps then cooking the meat with fat in a bag in a temperature controlled water bath can give excellent results, it uses less additional fat & is very consistent.